GNR/LNER Gresley A1 Class 4-6-2 No 1471 (not yet named) but later named after the last chairman of the GNR 'Sir Frederick Banbury' which took place on the 9th November 1922 at Doncaster. The new built pacific is seen at Potters Bar sometime between being released to traffic in July 1922 and the naming in November 1922. The following year she was given a prefix letter at the end of her number and she became 1471N. In August 1925 she became 4471, then in 1946 501,102 and then finally under BR No 60102. The engine was rebuilt like other original A1 Class engines to an A3 Class in October 1942. The engine spent time working on the GC line out of Leicester and Neasden depots from 1949-57. Thereafter Kings Cross-Doncaster and Grantham where her home sheds until withdrawal in November 1961. Shamefully this iconic engine was not preserved.
Simon Lathlane Collection
Simon Lathlane Collection 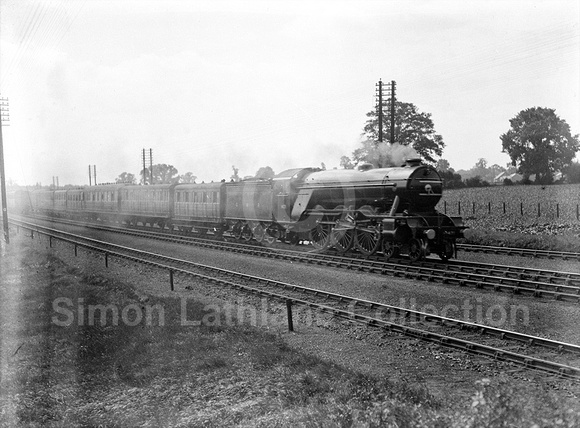