An historic moment captured on film at 12A Carlisle Kingmoor the rare sight of two original Princess Royal Class locos side by side. No 46200 'Princess Royal' in BR Red livery and sister engine No 46201 'Princess Elizabeth' in BR Brunswick Green. No 46200 would take over the fourteen coach train from 46201 but judging by the condition of the two locos it looks the other way round. The two Stanier engines were part of the RCTS/SLS 'Aberdeen Flyer' rail tour 2nd-3rd June No 46200 was withdrawn at the end of the year and sadly after being in store for two years was scrapped in October 1964. Thankfully 46201 was saved after withdrawal in October 1962 purchased by the Princess Royal Locomotive Society. The loco is a regular performer on the main line and long may that continue a joy to see in the northern fells.
Simon Lathlane Collection
Simon Lathlane Collection 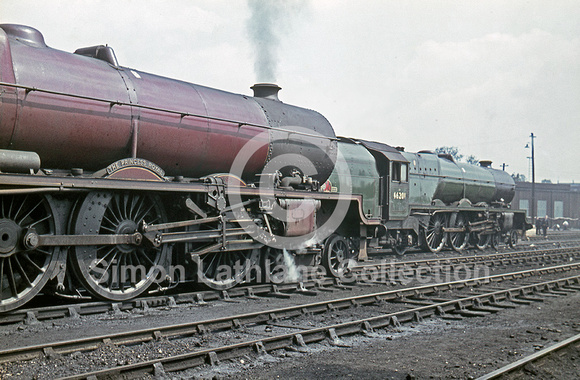