After much difficulty raising the capital and acquiring the land John Lang the contractor was given permission to start work on the Devon side. This view probably taken later in 1904 around October most likely on a Sunday shows the work on the Devon side with the village of Calstock on the other side of the river in Cornwall. In the foreground are three horse-hauled wagons and the cableways have been erected. Of note on the far side near the cable tower a house has been demolished to make way for one of the piers. The viaduct was constructed at the time of the postcard era and the building of it was well recorded by many photographers. None more so than by local Bank manager at the Lloyds branch in Calstock by the name of Frederick J. Paul. This could well be a view taken by him as he was publishing a new image of the viaduct every two weeks. He was a wonderful photographer capturing some superb compositions.
Simon Lathlane Collection
Simon Lathlane Collection 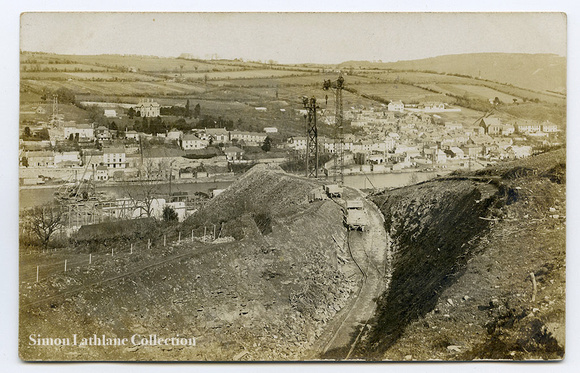